Sartorial Faux-pas of the Rich and Famous: the bottom button tale 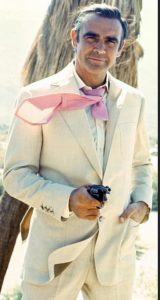 How  is it that one of the most elegant families of the 20th century could get such basic sartorial rules wrong? Granted that these rules are often enough meant to be  broken – after all, a good does of Sprezzatura when done correctly has never hurt anyone – but in this case it has nothing to do with the nonchalance ‘I don’t care’ attitude of Sprezz (usually aptly pulled through by those who are confident enough with the knowledge of the rules). At the beginning of the 20th century, especially in the 20s and 30’s where men where mostly wearing suits (all be it the only suit in the wardrobe), there has been plenty of photographic evidence that the bottom button on a mens coat remained fastened, despite it looking nefasto. The Kennedy’s here are a great example. Impeccable style, and yet that bottom button begs to be undone. I think it’s a fall back to it’s military roots, when all buttons were done up as it would look ‘scruffy’ or ‘insubordinate’ otherwise. Also because military gear also needed to keep you warm and thus allow as less cold/wind through.   Everyday ‘style’ later on started being much more popular as the jacket became mainstream, and used as a style piece rather than a necessity or a cultural obligation by the masses.  This ‘rule’ is there for a reason: the coat does not sit well, the button thus ‘pulls’ if it is done up as the movement of your hips and legs impede the coat to sit naturally when walking. One may legitimately ask why is it there in the first place, and I think that it probably has to do with natural esthetics and balance. I recently saw a Sean Connery film of the late 60’s and on it he too had his  grey 2 button suit all done up which surprised me (can’t seem to find a picture but here he is later on in time with the same look). Connery usually does have the bottom button correctly undone, but curiously enough throughout this particular film he doesn’t. As stated,  I think that the rule didn’t sink in until men’s coats were taken as a fashion statement en mass rather than an obligation  (post 60’s?). Just speculation on my part. What I do know is that it is one of the very few rules we are to consider unbreakable.

Unless you do up only the bottom button, but that takes us back to Sprezzatura only for the very brave.