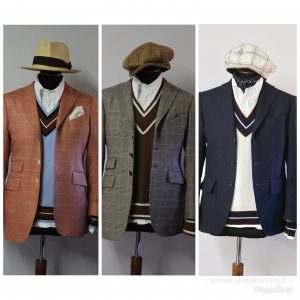 The idea behind the latest knitwear was obviously the classic sports sweater used in the early part of the XX’s Century (tennis and cricket being the main ones). Although the contrast colours were usually of the club or school, the base was mostly white or off white (as they were originally made for sports). The style was great, but I thought strong colours could be added to the basic white, as it would make such a great accessory to sports coats!  I did away with the cable knit as it would’ve made it too bulky to wear under a sports coat (unless the coat is one or two sizes bigger), and as you can see, a plain colour base allows for fantastic colour palettes: a sage, sky blue and plain white. Extrafine merino wool in a 12 gg knit is used and the best out there is made by the great folk at Tollegno 1900 from Biella, Italy. Made locally in Catalunya in only 40 pieces total.